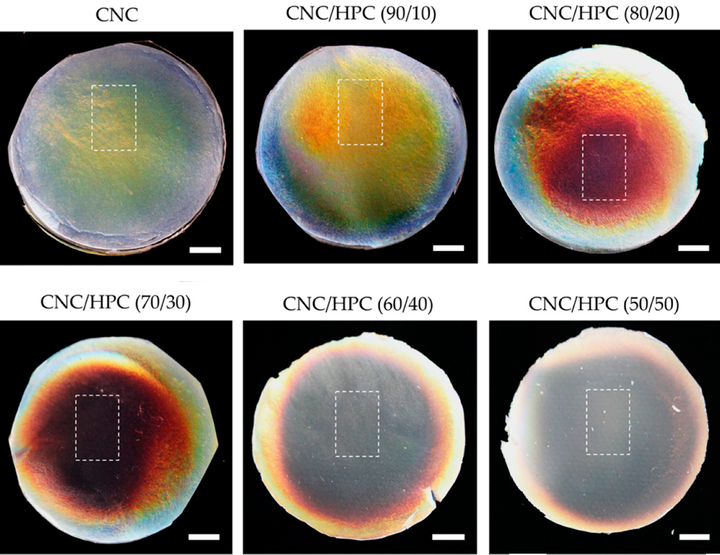 "Lyotropic colloidal aqueous suspensions of cellulose nanocrystals (CNCs) can, after solvent evaporation, retain their chiral nematic arrangement. As water is removed the pitch value of the suspension decreases and structural colour-generating films, which are mechanically brittle in nature, can be obtained. Increasing their flexibility while keeping the chiral nematic structure and biocompatible nature is a challenging task. However, if achievable, this will promote their use in new and interesting applications. In this study, we report on the addition of different amounts of hydroxypropyl cellulose (HPC) to CNCs suspension within the coexistence of the isotropic-anisotropic phases and infer the influence of this cellulosic derivative on the properties of the obtained solid films. It was possible to add 50 wt.% of HPC to a CNCs aqueous suspension (to obtain a 50/50 solids ratio) without disrupting the LC phase of CNCs and maintaining a left-handed helical structure in the obtained films. When 30 wt.% of HPC was added to the suspension of CNCs, a strong colouration in the film was still observed. This colour shifts to the near-infrared region as the HPC content in the colloidal suspension increases to 40 wt.% or 50 wt.% The all-cellulosic composite films present an increase in the maximum strain as the concentration of HPC increases, as shown by the bending experiments and an improvement in their thermal properties."